Dartco Transmission began as a spark of inspiration. Company founder and President, JR Sellars, quickly realized he had a knack for connecting customers with the products they needed to keep their businesses running. He started Dartco with his father in 1978 in a small shop outside of Los Angeles, California. In two short years, Dartco opened a rebuilding facility to overhaul and service Allison transmissions. By 1985, Allison recognized the facility as an authorized Allison Transmission Parts and Service Dealer, allowing Dartco to serve the greater Los Angeles area.

As the business expanded, so did JR’s sight on spreading Dartco’s service to other parts of the country. In 1996, Dartco opened a second location in Columbus, Indiana. Dartco’s Indiana location’s inventory consists of new, used, and remanufactured Allison parts, seal & gasket kits, and cores and is an authorized distributor for Hayden and Rocore oil coolers. This location serves as the corporate headquarters for Dartco Transmission. Dartco opened its third location in Royse City, Texas, a suburb of Dallas, in 2005, which moved to nearby Forney, Texas in 2017. This location specializes in new, used, and rebuilt Allison transmission parts for off-highway and oil field applications.

In 2011, Dartco opened a location in Charlotte, North Carolina. The 12,000 square foot facility is a parts and remanufacturing center to overhaul Allison transmissions for the southeastern region of the United States. The following year, it became the second Allison Authorized Transmission Parts and Service dealer, and now serves our customers in the southeastern United States.

Dartco is proud to serve customers around the world, providing parts and services to partners in North and South America, Europe, Asia and Australia and all points in between. Call on Dartco for any of your Allison transmission needs. Dartco Transmission – Where Service Matters. 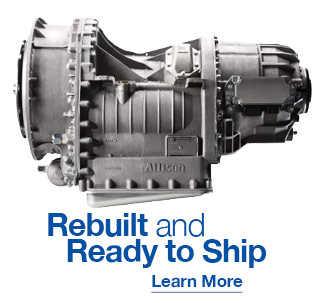